Built as a nautical school in 1703

The low half-timbered house situated at Storegade is the only preserved part of the original merchant house from the 1770s. The Empire house - the current main building just after the town gate - was built in 1813 in a classical style (French Empire style) with Dutch doors and English windows, together with warehouses, a shop and even a public bar. Since 1958, Møns Museum has been housed in this beautiful old property.

The museum exhibition shows local stories about the medieval town of Stege and the merchants of Stege. In addition, the museum provides tourist information and functions as the base for the hiking route called ‘Camønoen’. Camønen consists of walking and hiking routes around Møn, supplying cultural history around the island landscape. It also offers the possibility of staying in the museum's town shelter. Guests are welcome to enjoy their packed lunch in the cozy courtyard of the museum.

Now, continue on Storegade along the Empire building and the half-timbered house and notice the old yellow-washed gate built of granite boulders. It supposedly originates from the 13th century which means it is about 200 years older than Mølleporten town gate itself! It is called ‘Horse Guard Gate’, and the guard riders have probably been riding through here several times. But, it was also within the perimeters of this gate that the peasants who came from Eastern Møn to trade their hens and geese at the market parked their wagons and tugs while bargaining on the market.

Continue along Storegade towards the centre and turn right just after the large, gray corner property, built in 1841 by grocer H.P. Prior as yet another great merchant's house. 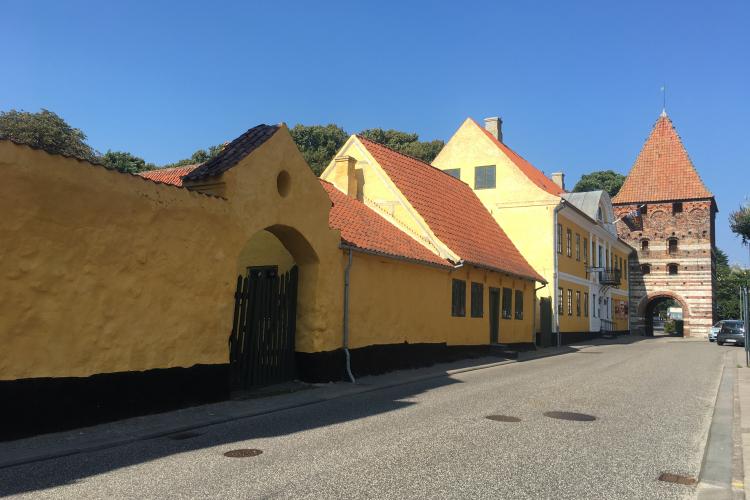 Built as a nautical school in 1703

End of ramparts at Stege Bay